Fifth Wheel Hitches are a special class of hitch that mounts over or forward of the rear axle of the towing vehicle. The vehicle being towed has a king pin on the end of the trailer which fits into the specially designed notch on the Fifth Wheel Hitch.

What are the components?

There are four main components in a Fifth Wheel Hitch. The hitch head, the base, the legs and the rails. 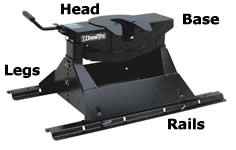 The hitch head is the section that has a jaw that funnels the trailers' king pin so a secure connection can be established with the pickup, the Fifth Wheel Hitch and the trailer.

The base is what the head rests on. Some Fifth Wheel Hitches can pivot fore and aft, some can also pivot side to side on the base.

The legs are what attach the base/hitch head combination to the rails.

Choose From These Topics

Why Shop With Us?

We have over 50 years experience in the towing industry! We are the experts! Towing Experts...

We are the only hitch company online that offers you a Lifetime Guarantee on all of the products that we offer. Lifetime Hitch Guarantee...

If you need to return a product that you ordered from us please contact us via our toll-free telephone number to work out the return - without any hassles or headaches. Easy Returns...